The question ‘How do you classify fragrances?’ is a pertinent one. The answer to this question, however, blends simplicity and complexity almost similarly to how perfumers blend sweet and sour scents and still make great perfumes. The simple answer is that you can classify and categorize fragrance ‘However you want’ – and the complexity lies in the various influences behind those wants. A few of the most common classification criteria for fragrances are described below. Some of the fragrance classifications are based on objective criteria, whereas other classifications are more subjective.

A lot of perfumers classify fragrances by gender (fragrances for men / fragrances for women / unisex fragrances). These classifications are often regarded as being for target marketing rather than based on objective data about men and women. In that regard, a man can enter a perfume store, smell a great fragrance, totally fall in love with it, and then ask the sales person “Is this perfume for men or for women?” In this instance, the question becomes pertinent when viewed from the perspective of the potentially disastrous ‘social consequences’ of wearing perfume meant for an opposite gender.

Al Haramain strives to cater for the fragrance needs of men and women alike, and because men and women are increasingly identifying with each other on several levels, Al Haramain also offers a wide range of unisex fragrances. However, the classification of perfumes by gender also has, to a certain extent, to do with the supposed use of ‘pheromones’ in perfumes (discussed in our last blog), which purport to influence the behavior of the opposite sex towards the wearer. In this regard, a perfume consumer may not want to attract members of a particular gender by wearing a particular perfume.

Classifying fragrances by fragrance notes / scents is dependent on how the fragrances actually smell. American born fragrance expert and author, Michael A. Edwards, published the ‘fragrance wheel’ – a visual portrayal of inferred relationships among fragrance groups based on comparisons of their odors. This ‘wheel’ was developed from an earlier guide he published to assist retailers in classifying fragrances and suggesting fragrances to consumers, which was called the ‘Fragrance Manual’. Edwards came up with 4 fragrance families namely Floral, Oriental, Woody and Fresh, which were sub-grouped into 11 and later, 14 different classifications between 1983 and 2010. In all of Edwards’ fragrance classifications, there are several Al Haramain fragrances for customers to choose from. The fragrance wheel categorizes the scents based on their dominant accords. For example, the ‘Oriental’ fragrance family consists of fragrances that have oriental resins, rich flowers, and warm notes such as vanilla, and musk. 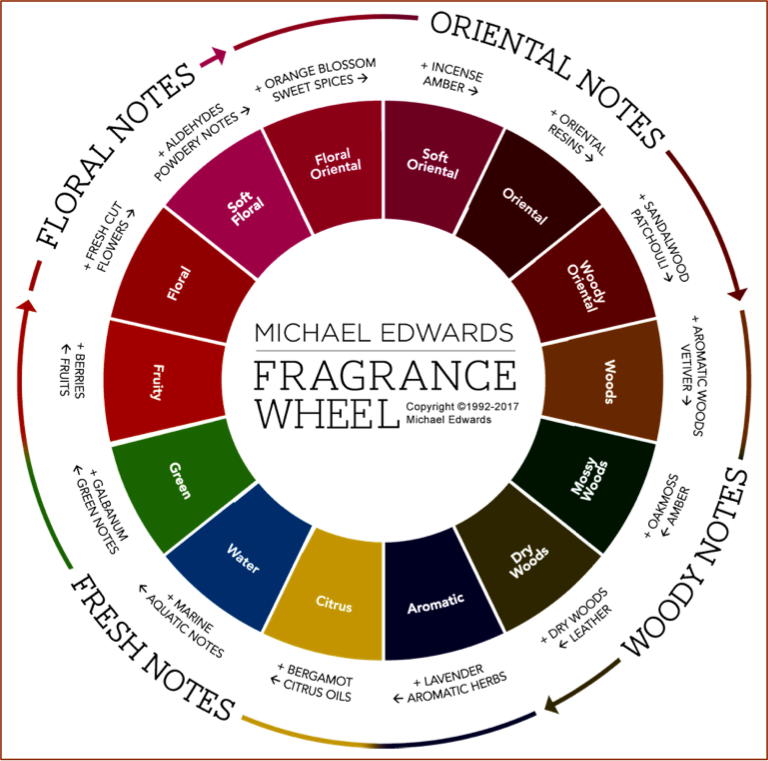 Additions and supplements based on Edwards’ model have also been developed, with fragrance classifications such as ‘Spicy’ and ‘Oceanic’ – the latter being a relatively new type of perfume containing synthetic aromas.

Fragrances, particularly liquid based ones, can also be objectively classified according to the concentration of fragrance used. The classifications that result from the various levels of concentration are referred to as Eau De Cologne, Eau De Toilette, Eau De Parfum, and lastly, Perfume. A pictorial representation of these is shown below:

Another objective way of grouping fragrances is based on how they are applied. The way fragrances are applied for usage also is related to how the fragrances are made. This kind of classification is what determines fragrance oils, sprays and incense. Oils are applied in liquid form directly onto the skin. They typically contain little or no alcohol, and thus evaporate more slowly.

Sprays, as the name suggests, are sprayed onto the body and diffuse the fragrance into the air and over a large surface of the body. Sprays ordinarily include alcohol, which helps the fragrance to evaporate faster, thus giving a scent trail and greater projection. Incense results from resinous substances that are burnt to release the fragrance. These various classifications help a consumer to determine the kind of fragrance that will suit their desired fragrance experience. Al Haramain has both oil and spray perfumes to meet the needs of customers according to their preferred method of application.

Sub categories for these exist. For example, personal care sprays include body sprays discussed earlier, and other types of sprays such as breath fresheners, shoe deodorizers, feet fresheners and even hair freshener sprays. Types of room fresheners can also depend on the type of room in which they are applied. There are different fragrances used for living rooms, kitchens, bathrooms and toilets. Some of these classifications are again about target marketing and also, have to do with niche marketing trends as perfumers seek to differentiate themselves from others through fragrances with highly specialized uses.

This fragrance classification criterion is simple enough, it has to do with whether a perfume contains alcohol or not. Thus Al Haramain has alcoholic perfumes and alcohol-free perfumes. This classification is significant on a number of levels. Firstly, from a sillage and projection perspective, fragrance consumers may opt for alcoholic perfumes if they are interested in spreading their aroma around them as they go about, due to the highly evaporative nature of alcohol and the way the alcohol gives the fragrances a ‘stronger’ scent. It takes a great amount of expertise to maintain the scent of the fragrance while it is carried and projected by an alcoholic medium. To this end, Al Haramain sources and makes the best denatured alcohol for its spray perfume range, which maintains the scent while at the same time projecting the potency of the fragrance. From a skin care perspective, consumers may opt for oil based fragrances as opposed to sprays. This is because the alcohol in spray perfumes evaporates quicker, and thus may leave the skin in the place where it was applied dry after some time. Oils, however, may also nourish and moisturize the skin while they give off the fragrance. Thirdly, alcohol as a substance is not permitted among some religious groups and sects. In that regard, fragrance consumers may opt for perfumes with alcohol or perfumes without alcohol based on their religious persuasions. Nevertheless, alcohol content is an objective classification of perfumes.

As stated before, there can be as many different ways of classifying fragrances as there are fragrance users, and the prominence of a particular classification criterion depends on various social, economic, environmental, and even political influences prevailing in a particular era. For example, a relatively new fragrance classification criterion has arisen in recent times, largely influenced by animal rights activists. This new categorization is based on whether or not the fragrances were tested on animals during the development stage, giving rise to what are termed ‘cruelty-free’ fragrances – which are fragrances that have not been tested on animals during their development. All Al Haramain products are personally tested by the company’s perfumers and are cruety free.

Having said this, we now turn to the influences that have driven this new multi-billion dollar ‘natural beauty’ industry, whose key selling proposition is the use of natural ingredients. Afterward, we will consider the various merits and demerits of the natural products, and conclude.